The Guide of Trust System in Final Fantasy XIV 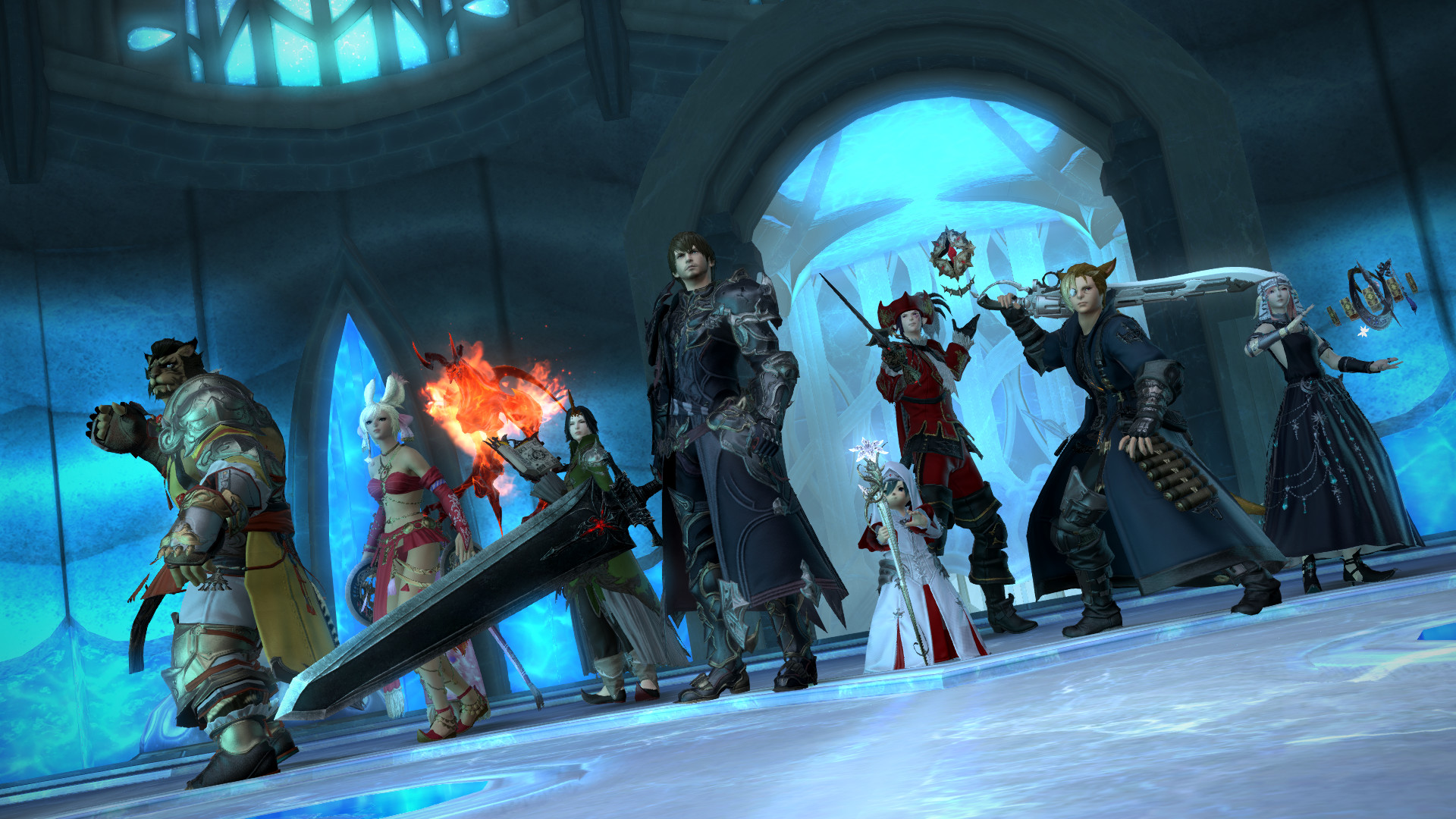 Final Fantasy XIV: Shadowbringer has introduced The Trust System to the game. Borrowed from Final Fantasy XI a few years ago, the trust system allows players to enter dungeons with AI companions rather than real humans. The trust systemis a feature introduced in Shadowbringers (5.0). This system allows you to challenge dungeons in the main scenario missions with allied NPCs. Participants must consist of 1 tank, 1 healer, and 2 DPS. This feature is not available when you are meeting with other players. The AI NPCs are part of the Scions of the Seventh Dawn, a group of famous characters who have been with players since the beginning of A Realm of Reborn.

The Trusts system is perfect for players who want to try a new dungeon, but worry that they don't have enough experience to join a real party. Instead, working with trusts can give anyone the opportunity to learn the mechanics of the dungeon first. Or they can dislike Scion characters altogether and play with real people. Getting started with the system is very easy, but there is a challenging requirement so far before you can use it.

After achieving the mission objective of clearing the dungeon in the main scenario, there are several allied NPCs standing near the entrance of the dungeon. Talking to them will give you the opportunity to add them to your party and enter the dungeon.

After all the trust avatars are changed to 80, the scene mode will be unlocked for free use, allowing you to re-enter all dungeons as you did the first time. 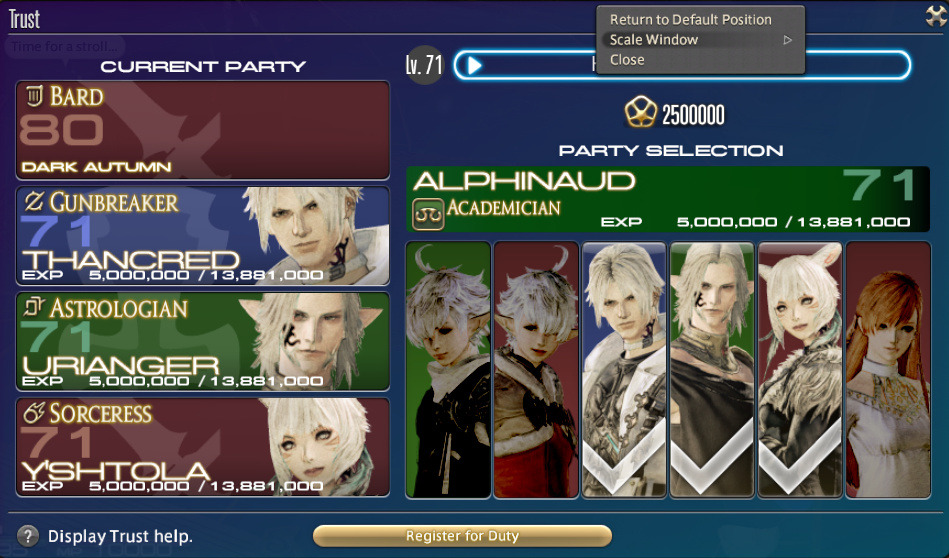 The Trust System allows you to enter dungeons that have already been completed. First, select "Trust under Duty" from the main menu. In the window that appears, select the dungeon you want to enter and the NPC you want to accompany you.

Trust avatars are always the minimum level to enter the dungeon until you complete the main scenario quest, Shadowbringer. After that, they return to level 71 and gain experience according to the following table.

When you unlock the level 71 dungeon in the Shadowbringers expansion, you will have the first option to use Trust System. This is a great way for new players or anyone not currently participating in Shadowbringers story quests. Since the developers are introducing the system as a new feature in the expansion, it is currently limited to dungeons released in patch 5.0 and above. However, once you have access to the system, you can (technically) trust any dungeon(including level 80 story dungeons).

Once you unlock a level 71 dungeon, you can talk to a nearby Scion NPC. You'll open the Trust menu, where you can select your party members and sign up for tasks. For example, if you run as a healer, there will always be at least one tank and two DPS roles to choose from. You will then enter the dungeon as usual without waiting for a queue. You'll still kill spam packs and bosses just like you would with a real player.

While Trusts are more conservative than real players (you won't find that AlphinaudDPS can act as a healer while leaving your tank dead), trusts can usually get the job done reliably. You can even follow them to learn about unsafe boss mechanics and learn from NPCs on the battle field. Each NPC has their own little personality traits, like how the eager Alisaie is a bit like the DPS himself, content with pushing boundaries. Each has funny jokes in each dungeon to make the run enjoyable.

Rewards and limitations with the Trust System 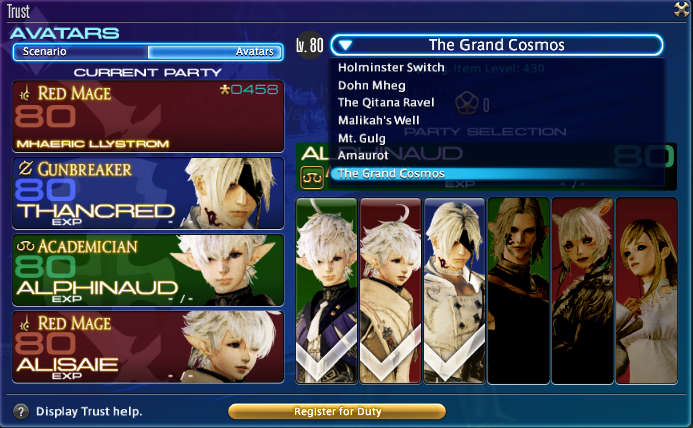 In addition to run dungeon by yourself, the Trust System offers unique rewards. Just like you, your AI companions earn experience points every time you run adungeon. Maximizing your characters will unlock different costumes for them, such as Y'Shtola's outfit before Shadowbringers.

But there's a catch. You'll need to upgrade your companions over time. You can use trusts to enter brand new dungeons for the first time, regardless of their level, regardless of where you are. For example, if your trusts get stuck at level 71, you won't be able to run level 73 dungeons. You must continue to run level 71 dungeons until the companion is upgraded. Therefore, you can unlock replacement equipment for your Scion companions. It's up to you to decide if the grinding is worth it.

The developers plan to expand the Trust System over time to add additional dungeons for players. To use the trust system, select Duty on the main menu at the bottom right of the screen and then select the Trust option. Here you can choose from a list of NPC party members with different levels and class types. When you are satisfied with the party, go ahead and select "Sign up forduty" to start the dungeon immediately without waiting any longer. Make sure you are not actively partying with other players, otherwise you won't be able to use the trust system.