How To Change The Color Of Your Chocobo in FFXIV

Your Chocobo mount is special and you want it to stand out from the crowd, right? In a sea of Desert Yellow Chocobos, yours could be a striking Royal Blue! A Regal Purple! A ...... Mud Green? The choice is yours, and here's how to change the Chocobo's pretty plumage. 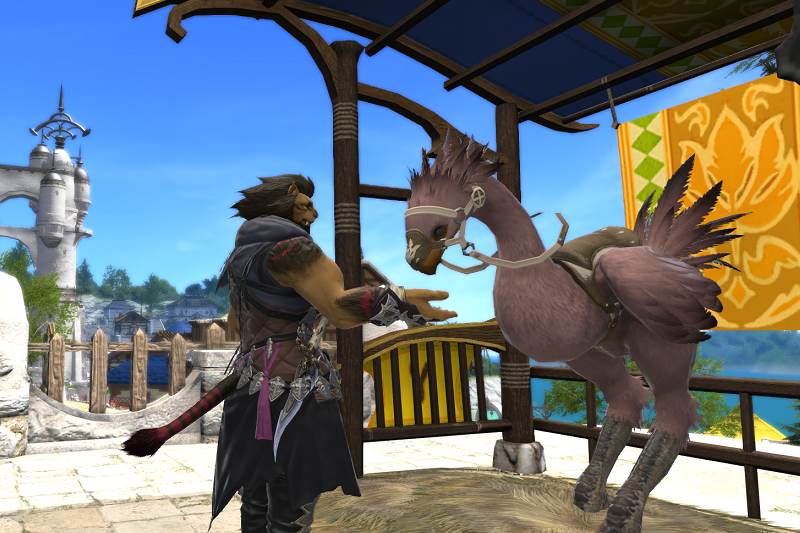 In Final Fantasy 14, you can change the Chocobo to take on different colors. That's how it works.

In Final Fantasy 14, players can have their own Chocobo mount once they reach level 20. At this point, they will be able to complete the My Little Chocobo side quest provided by an officer in their hometown state. Additionally, level 30 players can call their Chocobo into battle to help them defeat their enemies by completing the level 30 side quest "My Feisty Little Chocobo," which can be found in the Southern Shroud at (X: 17, Y : 28).

As with most things, players like to customize their Chocobo to truly create their own. In addition to being able to outfit Chocobo with vests to give them a new look, players can also change the color of their Chocobo by feeding them different foods. If you want to give your Chocobo a beautiful new shade, we've got it all for you below!

How To Change Your Chocobo's Color

After unlocking the Chocobo Companion, you can instantly change its color, provided you have access to the Chocobo Stables (in the player's house) and can buy the necessary fruits from the Marketboard. For new low-level players, it may be easiest to join an FC with an Estate and a Stable.

Stables can be purchased from the house dealer for 125,000 FFXIV Gil. Since these are items for outside use, you will need enough space to place one in your garden area. NPCs selling these items can be found in one of the following locations:

If you don't have an FC, or if one just doesn't exist, you can also use the Chocobo Stable if you have an Apartment. Each Apartment complex has its own Stable, right in front of the building, where you can interact with your own Chocobo companion.

Once your Chocobo is safely stabled, you can feed it snacks  by selecting the "Tend to My Chocobo" option. Once you've fed the first snack, you only have six hours to finish feeding the snack to get the color you want. After six hours, the Chocobo's feathers change to a different color as soon as the snack meets the color change requirement.

The color is calculated from the RGB values, and each snack you feed your Chocobo has its own RGB value. The standard color of your Chocobo is desert yellow with RGB values of 216/180/87. If you feed him a snack, these values will change to reflect what you are feeding him, and after six hours the color will change which is closest to the RGB values your Chocobo will have when he finishes eating is. This means that you don't have to get a color value that should be absolutely perfect, just close enough.

In addition, the standard color of the Chocobo is Desert Yellow. If you've changed the Chocobo's color and want to return it to Desert Yellow, all you have to do is feed it a Han Lemon. If you make a mistake while feeding, remove the Chocobo from the stable and the change will not take effect. If you still want to change the color of the mount, you will have to stable the Chocobo again and start the feeding process again, which will also reset the six-hour timer.

It is important to alternate the feed of Chocobo snacks so that you don't accidentally maximize the RGB value. If the RGB value exceeds 255 or falls below 0, the color change will fail. 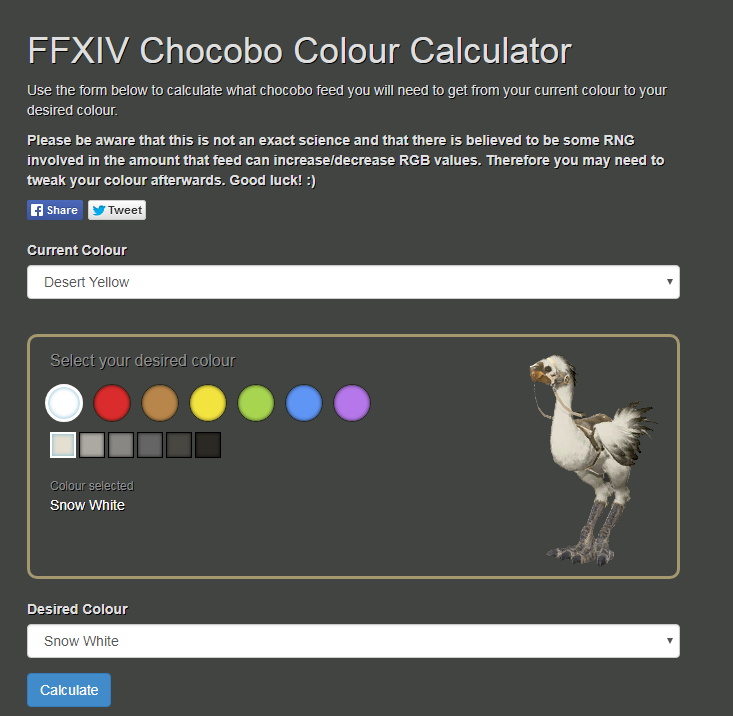 Each of the colours has a set of associated RGB values, listed here. Your Chocobo begins as Desert Yellow for example, which has RGB values of (219, 180, 87). Higher numbers lead to light, bright colours, while lower numbers give dark, deep colours.The way you change your Chocobo’s feathers are by feeding it fruits while it’s stabled. Each fruit increases or decreases the RGB values, so a specific amount of various fruits will get you from your starting values to your target values.

The way to change your Chocobo's plumage is to feed it fruit when it is stable. Each fruit increases or decreases the RGB value so that a certain number of different fruits will take you from the starting value to the target value.

Of course, there are only so many color options available, but there are more combinations of values. So if your Chocobo's RGB values don't exactly match the values in the list, approximations are made to produce the closest color.

So I'm trying to see if the new paint is suitable for our Chocobo. Maximizing the red values and minimizing the green and blue values (255, 0, 0) should result in a very bright, bright ruby red. Unfortunately, the result is a rather distant blood red (145, 59, 48), so that one can say that the new dye color has not been approved for Chocobo.